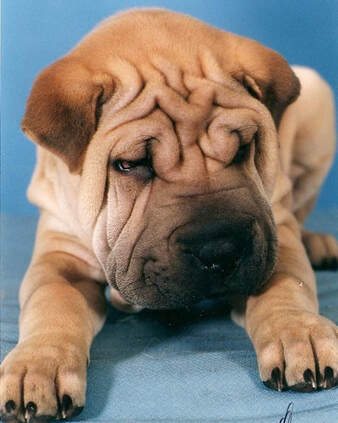 Although I had ideas for a canine first aid course in the late 1990's, Dallas, my shar-pei, was the main inspiration for the development of the Dogsafe Canine First Aid courses.

In the summer of 2001, I put my hand on Dallas' chest in order to move her out of the way of my front door and she screamed. It was not an "oops, sorry, I stepped on your toe" scream but a full blown, painful, "something is seriously wrong" scream. I immediately took her to my vet who determined thru x-rays that Dallas had a hardened disk that was putting pressure on her spinal column. After numerous consultations and many factors, it was decided that surgery was not an option and we decided to go with pain management. My vet stated that Dallas would eventually become paralyzed, but the time frame was unknown; it could be a week, a month or several months.

I accepted the fact that our trail running adventures were over but I still struggled to hold back my tears when I watched Dallas struggle to walk around the block. She was a trooper as she fought to keep her balance and control her back feet as they knuckled over. I hoped that the pain relievers were keeping her comfortable.

We made many trips to the vet over the next week. One time, after Dallas was recovering from general anesthesia, I tried to help her by lifting her slightly so she could walk over a door ledge. This clearly caused her pain because she latched onto my wrist and bit down hard. Although it hurt like crazy at the time, I now look fondly at those two puncture scars -- not only as a permanent reminder of Dallas but also how a dog in pain can react.

About 5 days later, I arrived home at 3am after working a night shift, and saw Dallas lying in her bed. She didn't greet me at the door as usual and I realized then that she could not stand up. She whined and struggled to move but could not stand up. Earlier, I had made the difficult decision that if Dallas lost all mobility, I would follow through with euthanasia. I was suddenly extremely sad knowing that this would be her last car ride -- a favorite event for Dallas.

I phoned my sister who came to assist me as Dallas was a big shar-pei, weighing about 70 lbs. I had no clue how to transport her properly but I wanted to make her as comfortable as possible. As she was paralyzed and couldn't walk, we looked for a hard surface to help us move her. I grabbed a kitchen cupboard that had been broken off its hinges for months (now I knew why I couldn't seem to get that fixed -- I would need it for a reason that I couldn't foresee). We managed to get the board under Dallas and walk to the car. As we walked, Dallas struggled and occasionally slipped around on the board, almost falling off, and itbroke my heart to think that I was letting her down at the end of her life.

We somehow managed to get the board onto the front passenger seat and drove about 20 minutes to the nearest 24 emergency veterinary clinic. Upon arriving, the staff were fantastic during such a highly emotional time and I will be forever grateful. The vet took her time explaining the procedure and allowed me to spend however long I wanted with Dallas before proceeding. In a private room, Dallas was given the lethal injection and died peacefully in my arms. Euthanasia is never an easy decision but one that I felt was right at the time.
I immediately started to think how I could've handled the situation better. Is there some way I could've known that the injury was progressing or was even there in the first place? In hindsight, I recalled that over the previous few years, Dallas was slower on our trail runs, she refused to jump up into my hatchback and she had a slightly curved back. She also obsessively licked her one front paw which could've been related to nerve tingling or damage in the affected area of her spine. I wanted to learn more about how dog's convey pain and since they can't tell us in words, I began studying canine body language.

Other questions started to enter my mind such as could I have been more prepared to transport her to the vets in her final days? What if this happened out in the trails when I was by myself? I started to think that I couldn't be the only "dog person" with such questions and Dogsafe Canine First Aid was soon born.

Thank you, Dallas, I know other dogs will be saved because of you.

In Memory of Dallas

What a great present for my 26th birthday,
a puppy that drew attention, everywhere along the way,
Remember as a puppy, all the library books you chewed,
or the 20lb bag of dirt you ripped opened thinking it was food?
You were known to stand motionless for hours and hours, yet ,
when it rained, you ran and ran so as not to get wet,
As a shar-pei, you had skin, ear and eye problems galore,
but I never minded waking, to clean your ears some more,
It was funny how you would sneak onto my bed,
and how Mia always saw you with pink bows on your head,
When you wanted me up, you'd bang on my bedroom door,
and after dinner you'd sit by the closet, waiting for more,
Road trips to Mexico were all part of the fun,
you were my buddy for hiking and when I went for a run,
The couch was used by you as one big scratching post,
your smile and the way you hugged is what I miss most,
Six and a half years is the time we spent together,
having you by my side, I can't think of anything better,
I'll miss you, little girl.